Beside the Angouran Lead And Zinc Complex itself, many companies use its concentrate as well as concentrate of other internal and abroad mines for the zinc production, including Khales-Sazan Zinc Industries and Iran National Lead and Zinc Company(in Persian) in Zanjan province that I had a chance to visit their sites.

First step at this process is dissolving of zinc in an aqueous sulfate solution that is conducted in different circumstances according to the input raw material characteristics. Totally, it includes primary and secondary dissolution. At the first one, neutral or weak acidic solution is used to react with soluble zinc compounds like oxide, sulfate, and silicate at moderate temperature. Then if it is required, a dissolution in strong and hot media is performed for example in the significant presence of zinc ferrite. 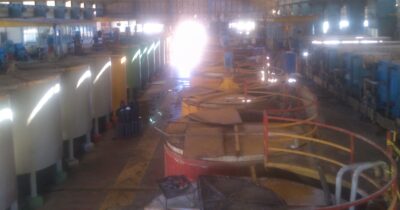 The next step is purifying the solution from impurities operated in two sections through the process. One is related to removal of iron and silica in an efficient way in which iron is precipitated as jarosite that causes removing a range of other impurities simultaneously. But if there is a little extent of iron, it is removed as hydroxide from during the dissolution steps as the leach residue. In the case of silica, the matter is if it turns to the gelatinous form in solution instead of crystals, it is difficult to filtrate easily by convenient methods using thickener, filter press, or vacuum drum. This phenomenon is controlled by parameters such as pH, concentration, initial seeds, temperature, and time.

The second section in solution treatment includes cementation reactions. Firstly, fine zinc dust powder is added to the solution at 65°C to precipitate Cu and Cd ions as metallic powder that is called cold filter cake (CFC). The next cementation occurs at 80°C to reach a Co/Ni cementate called Hot Filter Cake(HFC). At this step, some elements act as activator for cementation of others, for example Sb or As along with Cu is used for Co and Ni.

At the next step, the purified solution as a strong electrolyte with 70 g/l Zn is used for Zn electrowinning in which cathodes and anodes are made of aluminum and lead, respectively. Worth mentioning that during this process, lead in anodes is gradually oxidized and contaminates the final zinc product. To sop this event and reach the 99.98% purity, SrCO3 is used to reduce concentration of Pb ion by the sulfate coprecipitation method, as well as, the MnO4 powder is added to the solution to create a MnO2 cover on anodes decreasing anode corrosion. The second action gives an appealing velvet color to the spent electrolyte with 20 g/l Zn that is circulated throughout the process.

This was a summary of the complicated process running at mentioned factories based on my knowledge and observations, for which I'd like to thank prof. Keshavarz-Alamdari and prof. Tabaian.