The purpose of my master's studies

As I explained before (click on above button to read), I tried to choose a project with a close relationship to the industry to satisfy my passion for practical research. In this figure, Dr. Tabaian suggested a project in the field of Celestine processing.

Celestine is the main ore for production of strontium compounds, especially SrCO3 that is the major form for trading purposes in the world and other required compounds are produced from it. Although Iran is a rich country in Celestine reserves, a large part of SrCO3 demand is imported from other countries. In this regard, the suggested project was about design to launch a production line of SrCO3 using a local Celestine ore.

However, we were just two graduate students at first when we started the project. So, the two of us did a series of initial experiments in all mentioned categories. I mean we started our work by delivering a Celestine rock with following characterization from a local mine:

Then, we use different crushers and mills to reduce the size of material. After that, I worked on concentration of this powder using a shaking table. The next step was black-ash process in which Celestine concentrate consisting of 85% SrSO4, from the last step, was converted to SrCO3 with %95 purity as final product. Totally, following figure summarizes what I have done in this research. 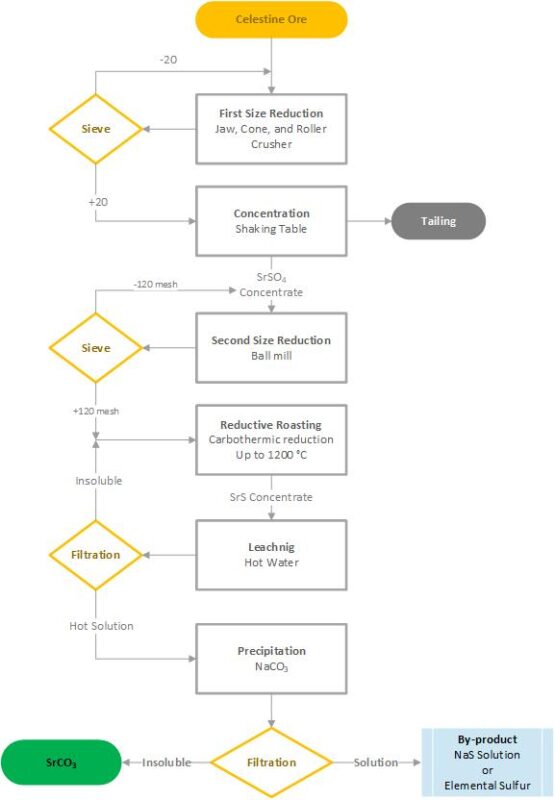 The major part of my investigation was specified to study the pyrometallurgical stage, the reductive roasting. At this step, carbon in the coke causes reductive roasting of Celestine. At low temperatures, just first of below reactions occurs, while at high temperatures, the second one is the main that is because of the Boudouard reaction:

After initial tests, a series of experiments based on central composite design was conducted to evaluate effects of temperature, time and amount of carbon factors on this stage. For analysis of results, I used the response surface method and suggested following model in this regard:

In which %R, t, and C are the percent of SrSO4 converted to SrS, time, and used-to-stoichiometric carbon ratio, respectively. In this formula, the temperature factor doesn't exist that means it has no significant effect on reaction progress as can be observed in below visualized results:

Also, I have worked on setting a suitable setup for each step of this process. For example, to achieve an adequate one for reductive roasting stage, I changed and tested various parameters including:

According to these evaluations, a setup such as below scheme was prepared to do experiments:

As the final note, I would like to thank Drs. Firoozi and Haghshenas for their supervision and Dr. Tabaian for providing guidance throughout this research. Also, my appreciation goes to our laboratory technicians Messrs. Bahrami, Mosayyebi, and Chegini, who provided a safe, friendly environment for learning and research for us.