Through the hydrometallurgical route, the pregnant leach solution coming from the heap leaching process was treated in a SX/EW site. In the SX step, extraction of copper from the aqueous solution occurs in two counter-current stages in which according to the plan, a solution with 4.6 g/l Cu is obtained from the input solution containing 3.6g/l Cu. To this purpose, different organic solvents were used including LIX984, Acorga, and CP150. Then, the copper ion is transferred to the spent electrolyte, 38 g/l Cu, through the stripping process to reach a strong electrolyte, 43 g/l Cu. Of course, some pretreatments such as heating and adding additives are performed on rich electrolyte before sending it to the EW site. The EW section was consisted of 50 cells in series with a potential of about 2.5 v which in each one, there were 61 anodes and 60 cathodes made of lead alloy and stainless steel, respectively. 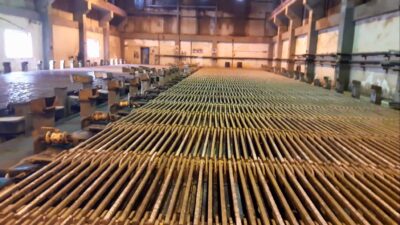 For preparing the ore for the pyrometallurgical process, it was crushed and milled by gyratory and cone crushers as well as ball and SAG mills to reach powder with a D80 of 270mesh. Then, this powder is sent to the concentration unit in which there are ruffles, cleaners, re-cleaners, and scavengers. Final concentrate would be contained of 26-27% Cu that its water content was reduced in thickeners and dryers before the next stage.

Concentrate from the ore dressing stage was smelted in the reverb furnace to get the matt phase. Then, the matt is converted to the blister copper, 98% Cu, by blowing the air. After that, as the final pyrometallurgical stage, the propane gas and air were used to remove impurities to reach an anode grade copper, 99.6%, that was casted in sheets to be used for the electrorefining.

In the last stage, each anode sheet was electrically refined during 11 days. At this period, concentration of  the copper ion was kept constant at 40 g/l through the decopperization process and concentration of impurities was reduced through the bleeding process. Also, some additives for intensifying nucleation and inhibiting dendrite formation were introduced to the electrolyte. At this ER unit in total, there were 960 cells of 50 cathodes resulting in 250,000 tonnes of pure copper being produced, 99.997%, annually.

Thank you to prof. Mohammadmehdi Salari and Dr. Reza Dehghan for their support of this visit. Wish them the best.