There are a number of factories in Iran that utilize the lead oxide concentrate produced in national mines that the Iran National Lead and Zinc Company(in Persian) is the biggest one.

At this factory, a pyrometallurgical route is ongoing to produce the lead metal. In this regard, a top blown rotary converter (TBRC) is used through the batch KALDO process. In this process the charge is fed alongside the natural gas , 98% oxygen, and fine coke to the furnace through different lances. Resulting, a molten lead called bullion sent for thermal refining, the speiss phase consist of Fe, As, & Cu, the slag consisting of Fe, Zn, Si, & Ca oxides, and dusts containing Pb and Zn compounds. 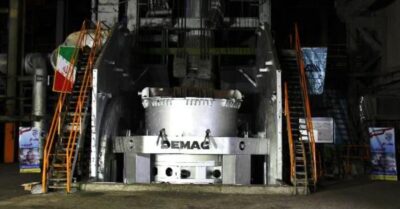 Impurities are removed through refining steps at proper temperatures on a batch basis in the following order that is conducted in standard kettles equipped with the mixers.

In the first step, by cooling the hot metal to about 400°C, the copper precipitates from the lead in the form of solid Cu, CuS, or Cu2S according to composition and temperature. These copper compounds are less dense than lead and float to the surface and are skimmed off.

In the next step, target elements are oxidized by adding NaNO3 and reacted with NaOH to form sodium arsenite, sodium antimonite and sodium stannate, which form a molten salt slag in which arsenic, antimony, and tin are concentrated due to their preferential oxidation to lead.

The precious metals, particularly silver, are removed by the Parkes process which uses the ability to form high melting point intermetallic compounds with zinc. In this figure, zinc is added and dissolved into hot lead coming forward from the last step at around 600°C. Then, the lead is cooled to allow solid phases to form and float to the surface as a crust to be skimmed. Also, after that, zinc added for desilverising is removed by vacuum distillation.

Bismuth has an adverse effect on the electrochemical and corrosion properties of lead notably in the lead-acid battery. Its separation relies on the formation of high melting point intermetallic compounds with calcium and magnesium, similar to the last step. Also, as the final stage, remaining Mg, Ca, and other elements are oxidized and removed with addition of sodium hydroxide and sodium nitrate technique again.

This was a summary of the complicated process running at mentioned factories based on my knowledge and observations, for what I'd like to thank prof. Keshavarz-Alamdari and prof. Tabaian.